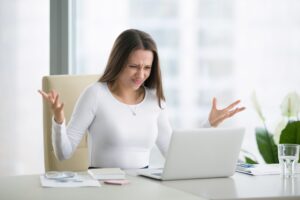 In addition to our in-house graphic designers who have a niche for digital production, we also work with freelance graphic designers on a regular basis and have the utmost respect for their talents. We love their creativity and out-of-the-box thinking that generally make for really interesting, unique and custom website designs.

If we’re working with a freelance graphic designer or a company’s internal graphic design team, we always seem to have to continually educate them on what can and can’t be done when it comes down to actually turning their designs into a functioning website or a custom WordPress theme. We hear the words “pixel perfect” all the time, but what exactly does that mean?

Most of the freelance graphic designers we work with leave the “mobile creative” up to us, giving us creative license to make their design work across all platforms and all orientations.  That’s cool – we have the talents here to do that and from a development standpoint, the user experience trumps design every day of the week; and twice on Sundays.

This talk about being “pixel perfect” brings up a story that I still think about very often.

We’ve been doing this a long time (we’re one of the most established web design & development agencies in Arizona) and the projects that we manage go very smoothly.  I don’t say this to toot our own horn, but that’s the way we roll. We keep our clients informed, we offer 100% of our talents and resources to ensure that our clients are taken care of and constantly informed every step of the way.  Are we perfect? No, but being that we establish a relationship with each of our clients, everyone’s comfortable talking about, and handling any issues that might come up.

Anyway, we were working with a freelance graphic designer who we’ve worked with on several web projects in the past.  Interestingly, those projects always seemed to have hiccups, speed-bumps, and there were always issues with communication, project expectations and overall project scope.

We received the layered Photoshop file of the design that we were to make a custom WordPress theme out of.  We saw some things that were “off”… they didn’t look right.  We went above and beyond cleaning up broken image borders, spaces between the photo and the photo border, sizing of page divider images, etc.  We spent a pretty good amount of time and effort cleaning up the work that the client approved.  Awesome, I thought.  We’re really enhancing a good design and we’re catching things that were missed both by the graphic designer as well as the client. That’s what partners do – they check each other’s work.  During regular phone calls and check-ins, these little “tweaks” were mentioned and not much more was discussed. All good… so I thought.

So, as we’re developing this custom WordPress theme, I get a phone call from this freelance graphic designer.  The issue about being “pixel perfect” comes up.  We talk about the irregularities that we found and fixed, we talk about how we’ve talked about this before.  We’re instructed to (and I quote) “All you need to do is make this “pixel perfect”.  But… but… but…OK.  That’s what we’ll do.  So, we continue to find abnormalities in the design, but now, we’re instructed to make things “pixel perfect”.  That’s what we do.  I definitely don’t want another one of these types of phone calls.  Guess what happens?  Yep, you guessed it. We continue to develop the provided graphic file “pixel perfect”.  Not correcting anything that we see, and then there’s a “major problem”.  What’s that? I ask.  “Well”, I’m told; “You should have known to fix those things you saw”.  Ughh….

So what’s the issue?

The issue comes down to education.

I don’t wanna sound like I’m on a rant, but freelance graphic designers who represent themselves as a web designer need to know (and understand) their core-competence.  Additionally, they need to understand the whole reason they’re making the margin on development teams is to manage their client and the project in general.

Getting back to the topic above, where we talk about client expectations.  This is directly related to the freelance graphic designer / freelance web designer.

If a freelance graphic designer / freelance web designer is outsourcing the development, they need to know how to manage the client & project. From a developer’s standpoint, the freelancer is the client – not the client.  Weird, huh? At the same time, it would really be transparent if the end user / client knew who was doing what, and who’s responsible for what.

So, what about the freelance graphic / web designer who wants a development company to be the “invisible man”?  That’s cool.  We work with dozens of media/press agencies where that’s exactly the case.  Here’s the difference.  That media/press agency is billing us out at X number of dollars an hour, while we charge them Y number of dollars an hour.  All good there because the steady stream of projects is worth the discount to the web development agency.  But, the reputable media/press agencies who understand this relationship also understand that to earn this margin, they’ll need to put forth some effort.  That effort is with managing their client, acting as triage with any support issues, change requests, etc.  More often than not, they have this covered perfectly and they establish and maintain their relationship with their client while at the same time providing additional “value-add’ services that web agencies provide.  No problem!  We do it every day!

The issue for the client working with a freelance graphic designer or a freelance web designer is a matter of responsibility and ownership.  The client has a single point of contact – their graphic/web designer.  They often times don’t realize that a digital agency is actually the ones doing the work.  The freelancer wants all the upside (making margin), but they don’t want to work for it.  We have solutions for that too – it’s called a referral.

Freelance graphic designers (freelance web designers) might not always know how to code and develop what they present.  Other graphic designers who want to play “project manager” don’t know how to manage a digital project.  As the end user, the client, the one who’s writing the check… ask the questions. Be informed. Become educated. Don’t be afraid to question why things are taking longer than they should be done, reviewed, or launched. Managing a digital project has an enormous number of moving pieces and more often than not, the task of managing the project should go to the person/firm most qualified to do so.  It’ll save a bunch of headaches along the way, plus… the client will end up being happier! That’s the goal.

The Difference Between UX and UI Design: Why it Matters

We'd love to talk with you about your project! Get on our schedule for a no obligation
no pressure and no cost consultation to discuss your web or digital marketing project!
Schedule Your Consultation Now!

Item added to your cart

Continue Shopping Go To The Cart